One can argue that a lack of draft pedigree and the retention of those top-10 picks that the Boston Bruins scored with in 2010 and 2011 is a significant factor in the team’s recent two-year, non-playoff slide.

The flip side to that argument is that the B’s have been able to remain competitive in the Atlantic Division, and aside from last spring’s implosion in the last 25 days, a big reason for that are the contributions of several undrafted free agents to the club’s fortunes.

All three of Torey Krug, Frank Vatrano and Noel Acciari were completely passed over in NHL draft.  The trio went on to play NCAA hockey and eventually signed with Boston, all of them seeing NHL action pretty soon afterwards. In Krug’s case, he’s become one of the team’s most reliable two-way defenders, recently inking a four-year extension. Vatrano and Acciari could both take big steps this year as key contributors while providing different roles in Boston. A fourth free agent, Austin Czarnik, is coming off a very good rookie pro season in the AHL last year and could push for NHL playing time as well, as could journeyman defender Chris Casto (signed in 2013) and former Swift Current (WHL) captain Colby Cave is in the mix down in Providence as well.

Some will say that the lack of former first-round picks puts the Bruins at a disadvantage, but when you consider that Brett Connolly (now with Washington) was the highest-drafted player on the roster from a year ago, draft position isn’t as important as the consistency and production. Without the early draft positions of teams that bottom-out in the standings, the B’s are going to have to keep making hay by finding players wherever they can, and players like Krug and Vatrano are showing that you don’t have to be a top selection to make an impact.

This post, one of several that will go into detail on each undrafted free agent on the Boston roster, looks at Krug, who has been the team’s biggest success since joining the club in the spring of 2012.

One of the things the 25-year-old defenseman and veteran of 241 NHL games usually brings up when you talk to him about how he beat the odds without the natural size or a draft pedigree to reach hockey’s highest level is the fact that he grew up with three brothers who all helped immeasurably to toughen him up. The word the Krugs all like to use is “mettle,” and since breaking into the NHL, Boston’s No. 47 has proven his mettle time and time again.

But, in order to begin to understand what makes him tick and drives him, you have to go back well before his time with the Bruins.

A supremely gifted athlete, Kyle and Cheryl Krug’s third of four sons often had to contend with older brothers Adam and Matt, who didn’t cut their diminutive but fiery younger sibling any slack despite a significant age gap between them. With eight and six years respectively on Torey, they were much more physically advanced, which meant they usually prevailed in physical contests. Note the use of the word usually in lieu of always, and young Torey learned at a tender age how to use guile and cleverness to gain an advantage wherever he could (remember that- it becomes important later on). Youngest brother Zak (who didn’t play hockey, instead choosing volleyball as a NCAA student athlete), Torey says, is the most competitive of all of them. The Krug brothers brought out the best in each other, and those intra-family rivalries helped to build a foundation that paved the way for the third Krug son’s NHL success in the wake of his older brothers’ college and pro hockey example.

The former Michigan State captain (named to that position as a 19-year-old sophomore- a rarity that speaks to his character and ability to inspire) has always been driven by his love of family, passion for hockey and the slights and doubts that have dogged him since he was a standout minor player, buzzing around the ice and making players much bigger than he was look quite small by comparison.

His dad, who played at Eastern Michigan and is a well-known coach in and around Detroit, helped build a suit of armor around his son as Torey progressed up the elite hockey ladder there, teaching him the hard lessons that went well beyond the systems their teams executed. There were times when other kids and parents whispered that Torey got preferential treatment as the coach’s son, but the reality is that Krug was pushed harder than anyone else, and he earned that ice time the old fashioned way. When you consider that folks still talk about Kyle Krug cutting some kid named Mike Modano from one of his teams back in the day, it isn’t hard to realize that Coach Krug drove his son harder than anyone else, but he did it to bring the best out of him. Mission accomplished.

Yet, even as Krug excelled in the sport as a teen, college programs kept their distance. Unfortunately for him, the size bias he faced as a high schooler wouldn’t end there. Ultimately, Krug has taken relish in proving the doubters wrong time after time since then, but it was a bitter pill for him to swallow when he would see inferior players his age being recruited and locked up to scholarships while he received tepid D1 NCAA interest at best.

However, as he began to look ahead to his final year of high school for the 2008-09 season, there was one team that came calling. Krug’s willingness to take some risk by leaving home at 17 to play in the much more rugged USHL- a junior league dominated by older, bigger, stronger players provided him with an opportunity to not only win a championship, but put Krug on a path that would bring him to Boston and the NHL just three short years later.

The Indiana Ice convinced him to leave his family in Detroit for Indianapolis. It was a major sacrifice to give up a comfortable situation and play at a much higher level than he was used to, but he went, because if you haven’t figured it out by now- Krug has never backed down from any challenge. And wouldn’t you know it- a young coach named Jeff Blashill, who would one day rise to take a position behind the bench of Krug’s beloved Detroit Red Wings, saw the young defender’s potential and gave him the ice time and trust with which to flourish. Although it wasn’t enough to get him drafted into the NHL that June, Krug’s 10 goals and 47 points in 59 games (very impressive numbers for a 17-year-old rookie defenseman in that league) secured him a place with the Michigan State Spartans, where he would go on to have three fine seasons in East Lansing (and where he got engaged to the love of his life, wife Melanie).

The Bruins could have drafted him, but didn’t. Heck all 29 other teams are in the same boat, and while the bidding was fierce for him in 2012 after a 12-goal, 34 point (38 games) junior season, Krug remembered the interest Boston had showed in him early on. Give Boston assistant amateur scouting director Scott Fitzgerald an assist- he and others in the organization too the time and cultivated a relationship with Krug before he decided to leave school. Even though the B’s courted disaster by not investing a draft pick to secure his rights when they should have, they still got their guy.

Give Krug an apple as well- he could have  chosen from several NHL destinations that might have afforded him a shorter path to the big show given the B’s were just one year removed from winning a Stanley Cup and still had a solid veteran defense in place, but personal principles matter to Torey Krug. Why? Because that’s how Kyle and Cheryl Krug raised him, and he learned the game and personal discipline from his dad, but also courage, selflessness and commitment from his mom. He chose Boston because those are the values he learned from following Adam and Matt around observing their sacrifices and work to play hockey at the pro level. He didn’t just grab the money and quickest path to the NHL because he recognized his youngest brother’s personal courage at walking away from the family’s focus on hockey to blaze his own successful trail in a different sport. The biggest difference between those other teams and Boston is that back when Krug was trying to establish himself at Michigan St., the B’s were the ones who took the time to say they believed in him. Those other guys? Johnny-come-latelies, walking through the door of the party after the main event already happened.

Before you confidently declare that athletes will only act in their self interests, take a moment and remember what Torey Krug did.

Four years and a lockout that wiped out half of the 2012-13 campaign later, Krug led all Boston defensemen in scoring last season with 44 points. Though he scored just four goals, he also played much of the year with one arm, having offseason shoulder surgery that is expected to make him right again. He’s at a disadvantage when it comes to size, but Claude Julien has talked repeatedly about how smart Krug is and how he uses his natural wits to outthink opponents and make the right defensive plays. Some out there might declare that he can’t play defense, but the film study and analytics don’t lie. Every NHL defenseman, no matter how accomplished, gets beaten for a goal on occasion, but Krug is far more effective with and without the puck on his stick in his own end than some give him credit for. Just like he did with his brothers, Krug often outsmarts the opposition and thinks the game at such a high level that he can more than compensate for what he gives away physically to a bigger, stronger forward in most situations.

That intelligence and the white-hot fire that burns within Krug’s heart are what define him as an NHL defenseman. They are what convinced the Bruins that he was absolutely worth burning a year off his ELC to secure, and going forward- is the kind of player who you can expect will do all in his power to get the B’s back on track. The team barely missed the playoffs in April and he was playing on just one arm. Think of what a fully healthy and established Krug might help the team accomplish.

That’s the Krug family mettle taking over again, and if you don’t believe it- just ask them to show you their tattoos. Mettle is much more than a word to them, and they’ve got the ink to prove it. 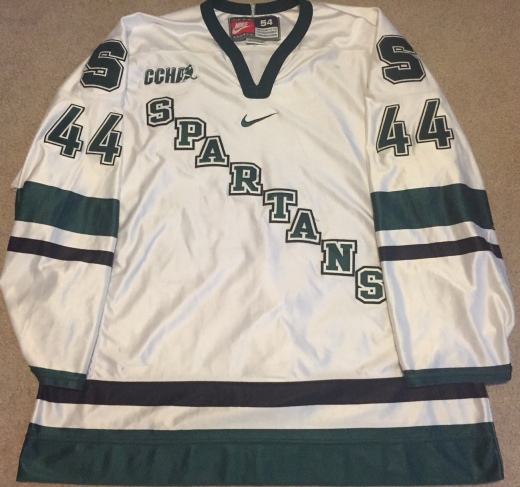 Torey Krug played at Michigan State from 2009-12 before signing with Boston after his junior season.

One thought on “The undrafted free agents: Torey Krug”