We’re glad to present another original TSP podcast production with special guest Court Lalonde of Bruins Diehards. He does his own tremendous weekly podcast via BD, and he was kind enough to take time out of his schedule to join us.

Court and Kirk cover a lot of ground, from his father’s playing days in the NHL to Court’s own journey to Bruins fandom. He makes a case for Rick Middleton to the HHOF, then discusses the players he’s admired most over the years. The two close with projecting the B’s chances in the 2020 NHL Playoffs.

Enjoy the podcast- here’s the Soundcloud link below.

It took a shootout and winning goal on the fourth iteration from rookie Ryan Donato to secure a 2-1 victory for the Bruins against the NY Islanders (Brad Marchand tallied Boston’s lone regulation goal) but the home team closed out a special night in which one of the franchise’s greats had his number 16 officially retired.

Richard D. “Rick” Middleton, known around the Boston Garden as “Nifty” from 1976-88, saw his digits raised to the rafters in a nice pre-game ceremony. The former Oshawa Generals great and first-round draft pick of the NY Rangers was acquired in one of longtime B’s GM Harry Sinden’s heists, sending veteran Ken Hodge to Broadway to rejoin his pal Phil Esposito for the electrifying but inconsistent Middleton, who was still figuring out how to be a pro hockey player in the Big Apple.

It didn’t take Middleton long to figure it out, and he became one of Boston’s true hockey stars in the late 70’s and 80’s. Although often lost in the mix when it comes to Bruins greats over the years, Nifty would end up making three trips to the Stanley Cup finals during his Bruins tenure, and he was a member of the 1979 B’s squad that experienced devastation and heartbreak in Montreal in the infamous “too many men on the ice” game 7. He’s the most recent Bruin to win a Lady Byng Memorial Trophy as the NHL’s most gentlemanly player, earned after the 1981-82 season.

In the early 80’s Middleton was the linchpin at forward for some very good Bruins teams, but they unfortunately ran into the NY Islanders dynasty.

What could have been a storybook ending for Middleton’s NHL career ended in a sweep by the Edmonton Oilers in the 1988 Stanley Cup final, but on the way, Nifty exorcised some Canadiens demons by being on the first B’s team to beat the Habs since World War Two was ongoing. Middleton’s breakaway game-winning goal in Game 3 at the Garden may be one of his most iconic moments in Boston; although he wore a Jofa helmet and no longer had the long golden locks that flowed behind his helmetless head when he got up to speed for so many seasons, the “old man” still had it and scored one of the most symbolic goals of his career.

Middleton didn’t make it into the Hockey Hall of Fame and in all honesty- he likely never will. But, for a lad growing up watching the Bruins, there was something magical about him. People can grumble about the team retiring his number if they want, but for those of us who saw him in his prime, elevating his play year after year in the midst of the Firewagon Hockey era of the late 70’s and 80’s, Nifty belongs in the rafters.

Thanks to Tuukka Rask’s excellent play in net, and Donato’s slick deke and tuck of the puck inside the post for the winning score- a move that no doubt made Mr. Middleton smile- one nifty, nifty night (to coin a phrase from Jack Edwards) ended the way it should have: 2 more points in the bank and one of Boston’s classiest and more unappreciated stars honored the right way. 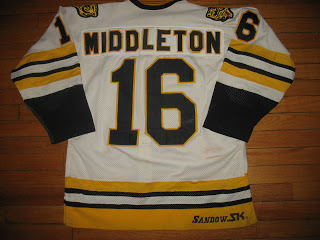 The Boston Bruins announced Tuesday that Richard D. Middleton aka Rick Middleton aka ‘Nifty’ the right wing who starred for the team from 1976-88, will have his number 16 retired in a game later this November (29th- vs the NY Islanders). The longtime New Hampshire resident and Bruins Alumni fixture is deeply touched by the gesture, which comes three decades after he skated off into the sunset (more on that later).

The former Oshawa Generals star broke into the NHL with the NY Rangers, who selected him in the 1st round, 14th overall, in the 1973 NHL Amateur Draft. Middleton was also picked by the Minnesota Fighting Saints of the rival WHA that same year, going in the second round, 21st overall.

The trade is right up there with Cam Neely as one of former Bruins GM Harry Sinden’s best heists, sending the over-the-hill Ken Hodge to Broadway for the 22-year-old, who put up 90 points in two seasons with the Rangers. The catalyst for the deal was believed to be Phil Esposito, who was dealt to the Rangers the season before in a blockbuster, which sent Brad Park and Jean Ratelle to the B’s. Espo wanted his old (no pun intended) reliable right wing back, and Middleton was rumored to be a bit of a wild card off the ice…his -38 in 1975-76 certainly didn’t help.

So, Middleton headed off the Boston and after a couple of solid, if unspectacular years (by the standards of the 1970’s), he took off, posting 38, 40, 44, and 51-goal seasons from 1978-82. He peaked in 1984 with a 47-goal, 105-point year (finishing second to Barry Pederson’s 116 points) but the Boston offensive juggernaut was silenced in the opening round of the playoffs by the Montreal Canadiens and Steve Penney, who sent them out with a whimper in 3 games (no points for Nifty). The year before, Middleton had posted a playoff season for the ages (33 points in 17 games), leading the Bruins past two rounds of the playoffs including the memorable 7-game affair against Buffalo where he registered a team-record (for one series) 19 points. Unfortunately, the B’s ran into the NY Islanders dynasty in the spring of 1983. Denis Potvin, Mike Bossy, Bryan Trottier, Billy Smith & Company dispatched them from the Wales Conference final in a series that never seemed that close, en route to a fourth consecutive Stanley Cup, leaving so many B’s fans to wonder…what if?

Middleton’s production steadily declined after that career 105-point campaign, due in part to age and injury, but he did preside over the historic defeat of the Montreal Canadiens in 1988, a first for any Bruins team since 1943. Middleton’s breakaway game-winner in Game 3 (2-0), to put the B’s up 2-1 in the series after splitting the games in Montreal was a fitting coda for a man who had been a part of so many heart-breaking losses to the Bleu, Blanc et Rouge during his entire Bruins tenure. He split the captaincy with Ray Bourque that year, wearing the ‘C’ for home games, until his retirement after the B’s were swept by Wayne Gretzky’s Edmonton Oilers (their 4th NHL title since 1984) giving way to Bourque’s sole leadership from 1988 until his trade to Colorado in the spring of 2000.

As a child of the 70’s and 80’s, Nifty was an ubiquitous presence in my budding love of hockey and the Bruins. Although not a pure burner, his golden locks (later shiny pate as his hair thinned and ultimately gave way to a Jofa helmet late in his career) looked like they were on fire as he would bob and weave through the neutral and offensive zones, often putting on a display of stickhandling prowess at impossible angles and contortions, ending with pucks in the back of the net or sublime back-door feeds for gift-wrapped tap-ins for his lucky linemates. The Mike Krushelnyski-Pederson-Middleton line racked up 111 goals in 1983-84…a number that seems awe-inspiring some 35 years later.

Although Middleton’s scoring numbers paled in comparison to Gretzky’s (The Great One scored 100 more points than Middleton’s 105 in 83-84 just for perspective), or Mario Lemieux or Bossy to name a few, he was a veritable King Midas for the B’s, creating magic from the mundane and turning pucks into goals. But don’t take my word for it- Channel 38 once paid tribute to him with a highlight reel video now on YouTube to America’s “You Can Do Magic” and I had it recorded on VHS and must’ve watched it 1000 times…

Ignored by the Hockey Hall of Fame, 30 years after he retired, taking his number out of circulation is a welcome move for those who watched him (and maybe a good percentage of fans who didn’t, but who appreciate history). Sure- there are some who may be opposed to the honor (it is the 11th so number retired by the B’s) but that’s just a curmudgeonly nature of New Englanders at work- deep down, even the grumblers get it. After all- we’ve seen Peter Douris, Jozef Stumpel, Randy Robitaille, Ken Belanger, Marco Sturm and most recently, Kaspars Daugavins (in 2012-13), wear the digits in the intervening years. None hold the distinction and cachet Middleton did, and in the end- it’s just a number. It’s time to admit that he wore it well…better than anyone in the Black and Gold. As his 402 goals as a Bruin can attest, he could finish plays off just as easily as he set the table, and was the heir to Espo as the next pure scoring forward to put on the spoked B.

If the Bruins can take the time to honor for a player who grew up and matured in Boston as a model of consistency and was the face of the franchise at least up front for the better part of a decade, then why not?