We’re back with another post about the Boston Bruins’ playoff roster. These are thoughts, observations and insights based on what’s out there, but much more to come as we have an exhibition game on the docket now late this month against Columbus before the B’s round robin schedule begins on August 2nd.

The B’s remain in camp on home practice ice through July 25, then travel to hub city Toronto for the next phase and (hopefully) resumption of NHL hockey.

Here’s a breakdown of the 1st nine forwards (in alphabetical order) and we’ll post up the others tomorrow. We appropriately lead with the most senior Bruin, Mssr. Bergeron…

Patrice Bergeron- Former Bruin Chris Kelly liked to call the B’s longest-tenured player Mr. Everything, and nine years after first hearing him say it in a soundbite, it’s holding up better than ever. Though Bergeron will turn 35 next week, he’s on a similar career arc to another famous (and former) New England sports icon Tom Brady, in that his most productive years in the NHL have come after he turned 30. His 31 goals in 61 games this season marked the third consecutive year he hit the 30-goal mark, and 4th in five seasons dating back to 2016. Had it not been for the season pause, he would’ve easily beaten his single-season best of 32 goals.

What more can you say about Bergeron that hasn’t been covered already? Though not an elite scorer, he’s productive and has always had a knack for scoring big goals in big moments (Hey, Toronto- we see you!). His defensive play has known no peer for years, and it is only the biased voting of sportswriters who would rather elevate other players around the league to the Frank J. Selke Trophy rather than see Bergeron win his fifth or sixth awards. No disrespect to the recent winners, but they aren’t in Bergeron’s class when it comes to defensive play, but they put up enough offense to justify the voters feeling good enough about themselves to cast the vote. We won’t talk about some of the dishonest Montreal and Chicago reporters who purposefully left him off their ballots in 2013 so that Jonathan Toews would win in a razor-close vote. But, given Bergeron’s class, he wouldn’t dwell on that, so we’ll channel Idina Menzel here and…let it go.

Bottom line- Bergeron has gotten better with age, and when he’s healthy, he’s the glue that makes Boston’s top line go. He’s got over 130 playoff games worth of experience, has a genius-level hockey IQ and oh, did we mention that he’s fully rested and healthy? Sounds like a recipe for some good times.

Anders Bjork- “Maybe the best player,” as described by B’s head coach Bruce Cassidy after day 1 of practice this week, will be in position to deliver on the promise that has surrounded him since he turned pro three years ago. As a reward, he slotted into David Pastrnak’s spot on the right wing with Bergeron and Brad Marchand. Inexperience and injuries have prevented the former Notre Dame Fighting Irish star from demonstrating the offensive talent the B’s have always felt he possesses, and while he’s not likely to develop into a frontline NHL scorer, his speed and intelligence make him a threat to become a solid complementary piece, the kind you win with. The offensive numbers to date belie the ability Bjork has to potentially get hot and provide some key offense at crunch time- he was one of the most valuable, if unheralded, members of a high-flying U.S. NTDP team from the stacked 1996 birth year.

Anton Blidh- If 2014 was a bonanza of a draft year, then the Bruins wouldn’t mind a redo of 2013. Only Blidh and fringe prospect D Wiley Sherman remain from that class, and Blidh was a late pick projected to be a role player/grinder at the NHL level if he could get there. He’s played at least one game with Boston in every NHL season since 16-17, with the most coming in a 19-game span that year. He brings speed and energy with some jam, but there’s very little skill and beyond being a depth guy to use in a pinch, you’re not likely to see him as a long-term option for the B’s.

Paul Carey- The Massachusetts native and longtime pro journeyman after four years at Boston College is the Trent Whitfield of this playoff roster. A solid all-around pro, Carey is a classic NHL ‘tweener- effective AHL player who is good enough to play NHL games, but is missing that element to carve out a niche for himself in the show beyond one full year on the non-playoff New York Rangers in 2017-18. This is not a diss- he’s seen NHL stints with every organization he’s been a part of- he’s a veteran, character guy who boosts the culture and has the experience to be a Swiss Army knife-type when pressed into duty. Having said that, with the B’s as a legitimate contender, it would be an extreme scenario indeed to see Carey on game night.

Charlie Coyle- One of Don Sweeney’s more savvy acquisitions a year ago at the trade deadline, the East Weymouth product delivered some important playoff contributions in 2019, and was having the second-best offensive campaign of his career when the music stopped in March. At 28 and fully rested and healed, he’s in his prime to be the anchor of a hard-to-play-against third line and is at his best when employed up the middle. It’s hard to believe it’s been a full decade since the San Jose Sharks drafted him 28th overall, but he’s continued to grow and flourish as a heavy, complementary center who is versatile enough to play any role and excels in the possession game. The best is yet to come offensively from Mr. Coyle, whose 9 goals and 16 points in the 2019 playoffs put him well ahead of his regular season points-per-game average. He’s a crunch-time player and the B’s were smart to extend him and keep him home in Boston.

Jake DeBrusk- Although streaky like many young forwards, DeBrusk’s skill and IQ make him one of Boston’s few pure scorers, and when he gets hot, look out. He’s up for a new contract after this postseason run, but the Bruins might be the ultimate beneficiaries up his up-and-down scoring, as a breakthrough year for him would have driven up the price of his second contract. Having said that, DeBrusk plays with pace and high energy- he’s been nothing if consistent in his three NHL seasons in terms of point production, so you know he’s going to do something. If he can get going in the postseason, he could be a major wild card for Boston’s playoff hopes. He’s been kind of a forgotten man without meeting the higher expectations coming into 19-20, but that could change quickly if he turns a few speedy rushes into red lights early on. 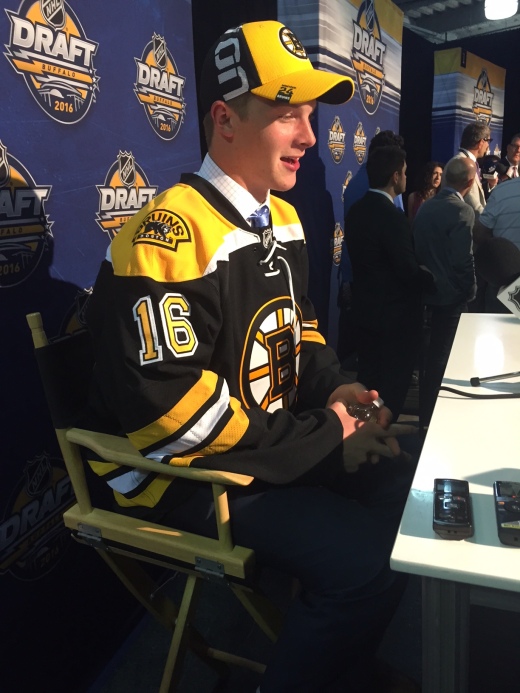 Trent Frederic- It’s not yet time for the second of two 1st-rounders in 2016 with the Bruins, but Frederic is close. He’s big, fast and has some skill, but will be more of a Charlie Coyle-lite as he works his way into more of an NHL role. For now, he’s here to soak up the experience and culture and benefit from being around the best Boston has to offer.

Ondrej Kase- Although not back on the ice yet, the most recent B’s acquisition is close to practicing with the team, and it will be interesting to see where and how he is employed after a very limited post-trade sample size before the pause. The 24-year-old posted just one assist in 6 games with the B’s, and while he didn’t play poorly, nor did he establish himself off the hop as a player ready to establish himself in the top-six. With his hands and offensive instincts there’s a lot to like, and with the benefit of the extended rest coming off an upper-body injury and a training camp to better acclimate himself and practice with the rest of the Boston team, we expect to see a different player come August.

David Krejci- He’s an appropriate bookend to Bergeron on this post, because the two are the top active playoff scorers for the franchise (they both have 103 points but Krejci has played in four fewer game to Bergeron’s 136). He was well off his regular season pace of 73 points from a year ago when the season stopped, but if we’ve learned anything about the crafty Krejci over his long career with the B’s, it’s that he usually saves his best for the postseason.

Now 34, he is a part of an aging core that must maximize their chances at taking advantage of a current championship window, so the added rest and recuperation has been critical for Krejci and the rest of the Bruins who were the regular season’s best club, and now have a chance to go for the jugular with the unprecedented break in schedule that has allowed an older, veteran club to get the kind of recharge that will benefit them better than many of the other younger teams.

With Krejci, we could see a return to the player who twice led the club in scoring en route to a Stanley Cup win in 2011 and the close-but-no-cigar run in 2013.

Dom, Reed and Kirk got together for a 3 Amigos reunion, making sure to practice social distancing in the process.

We’ve got more than 2 hours of (mostly) hockey talk, breaking down questions that readers submitted. A lot of it centers around uncertainty around David Krejci and Torey Krug going forward, Jack Studnicka’s promising early returns, and a look at how expansion might impact the NHL and Boston Bruins in 2021.

We recorded the audio before news of the Jack Ahcan signing broke, so we don’t have anything on the newest free agent signing for the B’s, but you can check out the quick-hitter we posted on him here yesterday on the blog.

So, let’s go- here’s the audio file. We’ve also posted it over at SoundCloud so that you can listen on the go…