Editor’s Note- Dominic Tiano is here with his thoughts on Windsor’s third Memorial Cup (CHL) championship in 9 years, plus an opinion addressing comments about the storied tournament’s format. Based in Stratford, Ontario- there aren’t many out there with a better handle on the OHL than Dom- enjoy. -KL 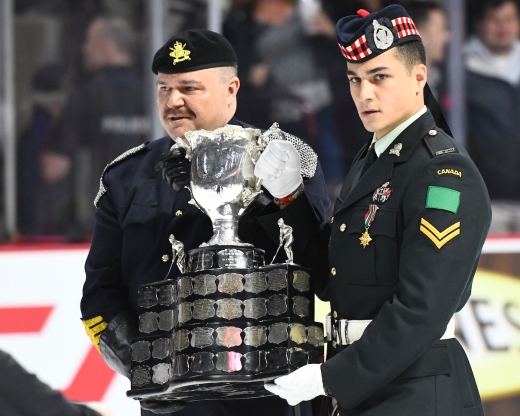 The Windsor Spitfires have captured 2017 Master Card Memorial Cup with a 4 – 3 victory over their Ontario Hockey League cousins, the Erie Otters. 2017 marked the 99th addition of the Memorial Cup, putting it up there with the Stanley Cup (1892) and the Grey Cup (1909) for longevity in North American team sports trophies.

It is the third consecutive Memorial Cup victory for an Ontario Hockey League franchise, just the third time a league has captured three straight under the current format which began in 1984. The Medicine Hat Tigers of the Western Hockey League captured the Cup back to back in 1987 and 1988 while the Swift Current Broncos won in 1989. Only three teams participated in 1987 as the OHL decided to send just one entry.

The Saint John Sea Dogs of the Quebec Major Junior Hockey League captured the Cup in 2011 followed by the Shawinigan Cataractes – the last host team to win before the Spitfires – in 2012 and the Halifax Mooseheads in 2013. It’s the Spitfires third championship, trailing only the Oshawa Generals (5) and the Regina Pats (4) for cup victories.

The biggest complaint I receive, and I admit they come mostly from friends south of the border, is that they think the format is ridiculous and there should be no such thing as a host team. The CHL has in the past tried neutral sites, but they, for the most part, were unsuccessful. One must remember the CHL is a business and it requires revenue to be sustainable.

So, fans ask me then “why can’t one of the three championship teams host?” Well, simply put, you can’t organize an event like the Memorial Cup in a matter of days. You can’t organize hundreds of volunteers, you can’t plan the off-ice events, you can’t sell tickets in advance, the list goes on and on. I’m not going to explain what the Memorial Cup stands for, that information is out there, but many Canadians are not ready to exclude the men and women who serve in our armed forces. And before the CHL names a host city, they make sure that the team that hosts is competitive and has a chance to win.

I’m not going to let that take away from the Spitfires accomplishment.

They went a perfect 4-0 in the playoff. They defeated three league champions, including the Otters twice. The Spitfires have won 12 consecutive Memorial Cup games (tying a CHL record) going back to 2009, their first of back to back Cup victories. Heading into the final, they hadn’t trailed at any time until the second period, but those two Erie leads were short lived.

With all due respect to Saint John and Seattle, they didn’t have to battle through the competition Erie and Windsor did.

For the first time this season, the Spitfires had a full roster and everyone was healthy. Much was said about their 44-day layoff and how prepared they would be after the longest layoff in Memorial Cup history.

Much credit goes to head coach Rocky Thompson, who came up with a plan, brought people in from outside the organization to help train, and kept his team in top condition. Thompson is an analytical coach, and I’m not talking advanced stats. He analyzes situations and he adapts quickly, but most importantly, his players hear his message and they execute. It was never more evident then it was in the third period versus the Otters once they took the 4-3 lead. Thompson is the first coach to win a Memorial Cup before a league championship.

It all began for the Spitfires on Friday May 19th when they opened against the Quebec Major Junior Hockey League Champion Saint John Sea Dogs winning 3-2. You can watch highlights here

On Sunday May 21st, they defeated the Western Hockey League champs Seattle Thunderbirds handily 7-1. You can watch those highlights here

On Wednesday May 24th, they completed the trifecta of league champions, defeating the Otters 4-2 and getting a birth in the finals while the Otters and Sea Dogs had to battle for a spot in the final. Highlights of the win over the Otters can be seen here

Dylan Strome won both the Stafford Smythe Memorial Trophy as Most Valuable Player and Ed Chynoweth Trophy as leading scorer.

Michael DiPietro won the Hap Emms Memorial Trophy as the Most Outstanding Goaltender.

Anthony Cirelli won the George Parsons Trophy as the Most Sportsmanlike Player.

You can catch highlights of the game here

We all know Boston Bruins President Cam Neely and General Manager Don Sweeney have decisions to make, some of them tough ones, when it comes to players. But what decisions are there to be made in the front office or behind the bench, if any?

A decision must be made whether to keep Bradly in the duo role or focus more on one position or the other. If the Bruins brass decides to keep the two positions separate, they could look outside the organization to fill the role, much like Chiarelli did when he brought Gretzky to Boston.

They could also promote someone from within, and there are a couple of very good possibilities currently scouting for the Bruins.

Dean Malkoc has been through ten drafts with the Bruins and has scouted Western Canada, but has done more cross-over scouting recently. Ryan Nadeau is about to enter his 15th season with the Bruins. He has served as Director of Hockey Operations/Analytics for the past three seasons while also scouring the NCAA as a scout. The Bruins have done well drafting from the NCAA the past few seasons and Nadeau deserves some credit.

With the interim tag being removed from coach Bruce “Butch” Cassidy, the head coaching job is filled. As an assistant under Claude Julien when he was dismissed by Sweeney during the season, could/should the Bruins be looking for another assistant now to serve under Cassidy?

Joe Sacco and Jay Pandolfo serve as assistants. Bob Essensa is the goaltending coach, but spent a lot of time watching from upstairs once the coaching change was made. It’s not known yet who may become available that has a professional resume under his belt, or if one will even become available.

The Bruins could also look at the minor-league level, juniors or the NCAA for coaching talent.

Allow me to throw a name into the circle if I may, he’s a long shot, but a very capable coach. Rocky Thompson, head coach of the Windsor Spitfires, who are currently competing for the Memorial Cup.

If you know me, then you know one area of concern I’ve had for the Bruins for some time now is the professional scouting department. The group is made up of Matt Lindblad, Adam Creighton, Tom McVie and Dennis Bonvie.

Creighton and McVie are the elders of the group, having been with the Bruins for 16 and 23 years respectively. There really isn’t enough of a sample size to judge Lindblad, added a year ago, and Bonvie, added two years ago. But this is one area I feel Neely and Sweeney must address this off season.

My Tweets
Join 127 other followers