Reed Duthie is back with another deep-dive on a European Bruins prospect- this time, Oskar Steen, who just completed his first North American pro season. The Off the top of the head and Then & Now prospect series are exclusive to The Scouting Post and we hope you are enjoying the analysis of B’s futures. -KL 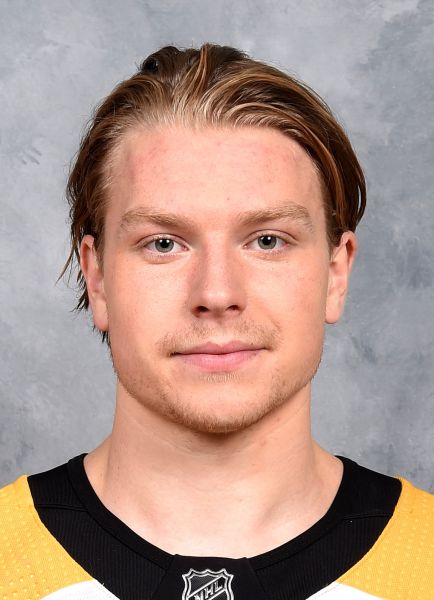 In the 6th round of the 2016 NHL Entry Draft the Boston Bruins used the 165th overall selection on an exciting talent from Karlstad, Sweden who had seen a breakout year jumping from Farjestad BK U20 in the SuperElit to Farjestad BK senior side in the SHL.

Immediately upon his selection Oskar Steen became one of the most intriguing prospects in the Bruins system.

As a 17-year old in the 2015-16 season, Steen was outstanding in the U20 circuit, collecting 8 goals & 24 assists for 32 points in 33 games finishing 2nd on his team, behind only August Gunnarsson who was playing his 19-year old season. Steen earned a callup to Farjestad BK in the SHL for a 17-game run where the diminutive but offensively gifted 17-year old would register 6 assists and even appear in five SHL playoff games.

It was the 2018-19 season that would see Steen kick his game into another gear, leading Farjestad BK in points by a forward with 37 and finishing 2nd on the team to Joakim Nygard in goals with 17 across 46 games following it up with 7 points in 14 playoff games. That run was enough for the Bruins to transition the centerman to North America for the shortened 19-20 season but Steen would show signs of the type of player he can be, finishing his AHL rookie campaign with Providence scoring 7 goals and 16 assists for 23 point, good for 8th on a fairly loaded Providence roster, while showing his durability playing in 60 games (only Ryan Fitzgerald & Josiah Didier played in more, 61 each).

Hockey IQ – An incredibly intelligent player, Steen has the ability to read the play well ahead of the pace and react quickly because of it. His advanced mind for the game has allowed him to successfully transition from the junior level to the senior level in his home country of Sweden and then transition again to the AHL all while still being an effective contributor in multiple facets.

Versatility – From using his tremendous intelligence for the game and from his developmental time with Farjestad BK, Steen has developed a very well-rounded game. A contributor for all 200-feet of the ice, Steen is a danger with and without the puck and can play in both power-play and short-handed situations and excel in any situation on the ice.

Speed – Excellent skater with quick acceleration, though his stride will begin somewhat short Steen quickly accelerates and lengthens his stride relying on his low center of gravity and powerful legs to drive him to full speed (think Sami Kapanen).

Vision/Distribution – Though not afraid to shoot the puck, as evidenced by his 17-goal outburst in his final SHL season, Steen is at his best with the puck on his stick locating his teammates with pinpoint passes to free them into open ice and scoring opportunities. Many of Steen’s scoring opportunities have come from defenders overplaying the pass and allowing him to use an ever-improving shot and release to find the back of the net.

Size – Not as big of a hindrance as it once was but standing 5’9’’ & 187 lbs, Steen is certainly not the biggest bear in the forest. Steen is able to use his bowling ball-like frame effectively, though he won’t go out of his way for contact he won’t avoid it either, relying on his strong balance, low center of gravity and smarts to win battles. Against larger defenders Steen can be simply outsized but is crafty enough to be able to beat them one-on-one.

Organizational Depth – If Steen were a natural winger his path to the Boston Bruins would be much clearer, however as a center he finds himself in a logjam behind the likes of Patrice Bergeron, David Krejci, Charlie Coyle & Sean Kuraly at the NHL level with fellow Providence teammates Jack Studnicka & Trent Frederic knocking on the door and 2019 1st Round Pick John Beecher a little further away.

A steal of a 6th round pick, Don Sweeney and the Bruins staff (*cough* P.J. Axelsson *cough*) must be commended for finding such a talent late in the draft and for having a hand in quickly developing him into a player who could knock at the door of an NHL spot as early as the 2020-21 season. Steen profiles as a player who could contribute in the middle-6, and brings the type of versatility the Bruins like with a serious offensive flair. With the depth at center in the organization, it would likely benefit both Steen and the Bruins to transition to the wing. A natural right-hand shot, Steen has the intelligence and versatility to excel on either wing and would very quickly cut down his time to an opportunity with the Bruins.

He is a player to keep an eye on, a versatile and skilled  forward with jam who could be another late-round, homegrown talent that could contribute in multiple faces of the game moving forward as the Bruins look to develop their next core of talent.

One thought on “Reed Duthie: Off the top of the head- Oskar Steen”

My Tweets
Join 126 other followers