Much of what I wrote for the New England Hockey Journal website was lost forever when the site changed formats and the archived unique content was replaced by the digital issues of the monthly publication. I managed to save some of my more memorable pieces, and one of them was a 20-year anniversary tribute I wrote to the 1986 Hartford Whalers for the New England Hockey Journal magazine in April 2006. The story was written on the eve of the 2006 playoffs, without knowing that in just a few months, the Carolina Hurricanes would raise the Stanley Cup overhead, defeating the Edmonton Oilers in a gritty seven-game series. 20 years after the Whalers showed such promise, their legacy finally resulted in an NHL championship in Raleigh, N.C.- different team, player and colors- same franchise. Mission accomplished.

But two decades earlier, the young, upstart Whalers won just a single playoff series that year against the Quebec Nordiques before taking the eventual Stanley Cup champion Montreal Canadiens to seven games in the Adams Division final, that team was memorable for their roster, which included a core group of future NHL stars. Sadly for Hartford, a lack of patience and unfortunate trade decisions would result in that team being broken up before they could come together and mature. Had the Whalers found a way to win more playoff games from 1988-90, it is entirely possible that the fateful trade of captain and Hall of Fame center Ron Francis and Ulf Samuelsson to Pittsburgh in 1991 might never have happened, and the Whalers might have been Stanley Cup contenders from 1992-96 instead of one of the league’s poorer clubs. We’ll never know, but the ’86 Whalers gave us a glimpse into a small window of what could have been.

And though the piece is a relatively superficial one, lacking the depth I wanted to go into given print constraints as a published article, it remains one of my favorite stories written for NEHJ in my seventeen years with Seamans Media. I hope you enjoy, and as you read it, you might even hear the ghostly strains of the Brass Bonanza bringing you back to a bygone era of NHL hockey in New England. Of course, you can always click on the link at the bottom of the post and hear it in real time, too…   – KL

They won’t go down in history as one of the NHL’s storied teams, but the 1985-86 Hartford Whalers gave their fans a glimpse into what could have been for a franchise that would exist in Connecticut for just a decade more before leaving for North Carolina in 1997.

After struggling to earn respect in the Wales Conference during the first half of the 1980’s, the Whalers not only made the 1986 playoffs as the Adams Division’s final seed, but turned in a stunning upset of the heavily-favored Quebec Nordiques in the first round. With the Hartford Civic Center fired up by the raucous Brass Bonanza, the Whalers then pushed the eventual Stanley Cup-champion Montreal Canadiens to a seventh game in the Adams Division final series before succumbing on a Claude Lemieux strike in overtime, ending Hartford’s championship dreams that spring in heartbreak.

Starting goaltender Mike Liut, who had been the center of a blockbuster trade from St. Louis the season before and was a veteran leader on that club, is now a player agent with the Octagon Firm out of Michigan. Liut said that the genesis of Hartford’s success in 1986 started in Boston late in the 1984-85 season, a forgettable campaign that saw the Whale finish out of the NHL postseason derby for the fifth consecutive year.

“We played the Bruins, who were looking to lock up second place, at the Boston Garden,” said Liut. “They jumped us from the outset, hitting us hard and treating it like a playoff game, while some of our players were perhaps playing out the string. It was a situation where the guys had to fight back with everything they had, or someone was going to get hurt.”

Liut watched from the bench that night as a team loaded with rookies, many of whom had not yet faced real adversity at the highest level, responded by soundly beating the Bruins, eventually forcing them into a first-round matchup without home ice advantage against the Canadiens after they dropped to third place.

“We went into a hornet’s nest in the Boston Garden that night, but came out with a win,” Liut said. “To beat the Bruins in that kind of environment showed a lot of the young guys on the team what we were capable of, and gave us a head start for the following year.”

1985-86 was a different season for the Whalers, who were led by embattled coach (the late) Jack “Tex” Evans. Liut had the benefit of spending the entire year in Hartford, while his cousin and team captain, Ron Francis, battled a broken ankle, but was productive with 77 points in 53 regular season games. Young guns Sylvain Turgeon (45 goals), Kevin Dineen (33), and Ray Ferraro (30) terrorized opposing goaltenders, while a competent corps of defenders that included Joel Quenneville and Ulf Samulesson, received a big boost with the acquisition of Dave Babych during the year. There was also no shortage of effective role players such as Doug Jarvis, Paul MacDermid, Dean Evason, Mike McEwen and Dave Tippett, all of whom combined to infuse the Whalers with skill and grit.

“We were a very close team,” Francis told New England Hockey Journal. “The veterans helped the younger players to take that next step and get us all to believe that we were a team capable of doing some damage in the postseason. We believed we could beat anyone.”

They won eight of their last 11 games to post a 40-36-4 regular season record. That was enough for Hartford to edge out the Buffalo Sabres to capture a playoff spot for the first time since 1980, when they were swept in three games of the preliminary round by the Canadiens.

Veteran forward John Anderson, now the head coach of Atlanta’s AHL affiliate Chicago Wolves franchise, was a genius move by Whalers GM Emile “the Cat” Francis, acquired from the Quebec Nordiques at the trade deadline after eight seasons Toronto Maple Leafs. He found new life and went on the greatest offensive run of his NHL career, playing a key role to get his new team into the postseason with a white-hot stick (eight goals, 17 assists in 14 games).

“To come to Hartford after some of the frustration I’d seen in Toronto was a great feeling,” Anderson said. “We were a young team, but everything was coming together at the right time for us. Nobody gave us much of a chance against Quebec, but we definitely turned some heads in that series”

Hartford opened the 1986 postseason in a best-of-five series against the division-leading Nordiques to low expectations around the rest of the league. As had been the case throughout much of the year however, the Whalers weren’t about to give into conventional thought.

Liut stoned the powerful Quebec attack that included Hall of Famers Peter Stastny and Michel Goulet. After posting a 3-2 overtime win in Game One, the Whalers went on to frustrate the Nords by sweeping them out with 4-1 and 9-4 victories, the third of which happened on home ice.  Anderson posted five points in that series-clinching win, putting an exclamation point on the upset against his former team. Few had given Hartford chance against a veteran team in Quebec, yet there they were- staring down the Canadiens, who were also coming off a sweep of the Bruins in round one.

The Whalers nearly upset the favored Habs because they got contributions from everyone on the roster. Backup goaltender Steve Weeks, now an assistant coach with the Atlanta Thrashers, got a chance to play when Liut was hit on the knee by a shot in warm-ups of Game 3 and responded by winning Game 4 in OT to take a 2-2 series split back to Montreal.

“When Mike went down, we could’ve panicked, but didn’t,” Weeks said. “The guys played with an unbelievable amount of poise, and when Kevin (Dineen) scored that overtime goal, we really believed that we could pull it off against Montreal.”

After trading home wins, the teams met for the decisive Game 7. The Habs took a 1-0 lead into the final frame before Babych ripped a slapshot past Patrick Roy at 17:13 of the third period to strike fear into the legions of Montreal faithful. Moments into the extra session, Lemieux, who would go on to win more championships in his polarizing NHL career, found himself alone in the slot in front of Liut and fired a high backhand shot over his glove for the emotional win at 5:55 of sudden death.

“You can’t speculate on what might’ve been,” said Liut reflecting back on the Whalers’ memorable playoff charge. “But that game definitely could’ve gone either way. One thing I’ll always take from the experience was that so many guys on the team came of age that spring.”

Though the ’86 Whalers won just a single playoff series during their 18 years in Hartford, their heroics live in the memories of those who witnessed them push the Habs to brink. Their legacy lives on in the Carolina Hurricanes, who are playoff-bound 20 years later and boast a 100-point scorer in young super star Eric Staal. Though Francis returned to the franchise that traded him and helped the 2002 Hurricanes to the Stanley Cup final, his Hall of Fame-worthy career ended with him unable to help push Carolina over the final hump against the Detroit Red Wings after winning a pair of championships in Pittsburgh.

“What I remember most is the enthusiasm the fans in Hartford had for us that year,” Francis said. “It was an honor to play in front of so many people who believed in us and got behind the Whalers. It was an unforgettable time for all of us.”

Here are highlights from the Whalers’ only playoff series win in team history (Boy, can you ever appreciate the birth of high definition in hockey broadcasts and understand why until HD came along, selling hockey on TV was a tough chore) 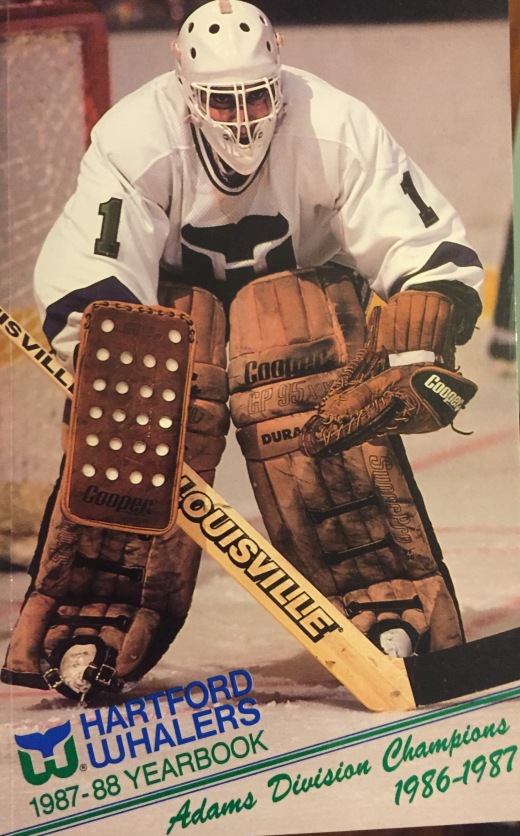 Not 1985-86, but here’s the old Whalermania 1986-87 video highlights tape- including an awkward intro from Ron Francis It was Hartford’s first and only Adams Division regular season title, but this time, the Quebec Nordiques flipped the script in the playoffs and a year after being upset by the Whale, they returned the favor.