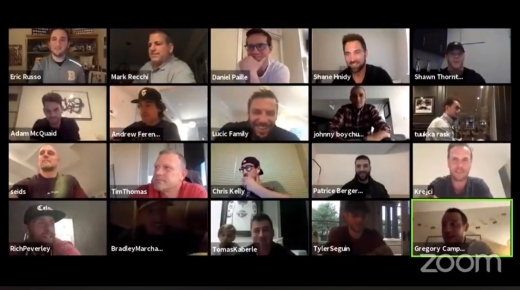 It may or may not have gone exactly the way the Boston Bruins public and media relations staff drew it up, but last night’s 2011 Stanley Cup team reunion on Zoom broadcast with Game 7 on NESN was high entertainment for those who got a chance to see it, even if the humor was narrowly focused on the B’s fanbase.

I mean, take 20 players, some still in the NHL as players and coaching staff, others out of the NHL but still involved in the game, and a few more retired and out of hockey, add wine, beer or other more potent libations of choice, quarantine during a global pandemic and then have them re-live one of the greatest games of their lives via virtual conferencing technology. What could possibly go wrong, right?

From a fan perspective, the event was gold, and it is one more example of the modern information age opening the door for the public getting to see a side of hockey players and the culture that they are rarely able…or authorized to. It was unfiltered, uncensored and unbelievable- just 20 guys watching what was for most of them, the finest moment of their careers, distilled to one decisive, crystalline 60-minute victory on the road to cap an improbable comeback of a dream season.

Championship teams win because when they go to battle on ice, they fight for each other. The NHL’s playoffs- more than two months of grueling, grinding, grappling to climb the summit and raise the Stanley Cup overhead in the middle of June- is a war of attrition that requires such excellence in performance but also unmatched, singular dedication to each and every one involved in reaching that goal. A lesser team would not have survived a pair of 0-2 holes in two of four playoff series that year. A dysfunctional group would have crumbled under the pressure of a 0-0 Game 7 against the toughest out of a Tampa Bay Lightning squad that posed a bad matchup for the B’s. In 2011, the Bruins dared us all to believe in them, and then they delivered.

Last night, fans got a firsthand look at why that team was special.

Milan Lucic held court for much of it, reminding us about why he was such a fan favorite in his Bruins days. Yes, his NHL career after being traded away in the summer of 2015 has gone the wrong way, but in 2011, he was at the height of prominence, winning another hockey championship in his home city of Vancouver, just as he did in 2007 as a member of the Memorial Cup-winning Giants of the WHL.

It was good to see Tim Thomas back with his teammates again. His Bruins tenure didn’t end well, and the open wounds on both sides of that departure had been allowed to fester in the intervening years. That is, until a few months back, when Thomas came back home, reluctantly told his story, and the vast majority of those who had felt rejected by his aloofness and distance, embraced him once more. His Vezina Trophy regular season and subsequent Conn Smythe spring of 2011 remains to this day arguably the greatest display of sustained excellence in goaltending the NHL has ever seen, and he deserves to celebrated, not criticized.

Current core Bruins Zdeno Chara, Patrice Bergeron, Brad Marchand, David Krejci and Tuukka Rask– comprising nearly a quarter of the roster that took home the championship nine years ago are still here. That in itself is a testament to their greatness to this franchise and that legacy will endure in Boston long after the last one of them plays his final game wearing a spoked-B. Many championship teams are all but scattered and gone just a few years later, but for these five to continue to represent this organization and produce the way they have nearly a decade later is proof of that 2011 team’s worthiness as champions.

We’ll stop there. After all, there were so many moments in the broadcast, so many myriad individual examples of why these players were able to accomplish what so many are unable to, but to do so would spoil it for those who haven’t seen it yet. And hopefully, if you missed it, there will be other opportunities for it to be seen and enjoyed going forward. Sure, the language and some of the comments were not for a general audience, but what the players showed us was real and typical of how great teams achieve that greatness- out of pure love and respect for one another, and how such an experience bonds them together for life.

For so many Bruins fans, 2011 marked the end of 39 long years of frustration- of multiple Boston hockey clubs coming oh-so-close to a championship but ultimately falling short. Even after the win in 2011, Boston has returned to the close-but-no-cigar reality of 2013 and 2019. That’s why this team, a group of players known for its cohesiveness even before the playoffs began nine years ago, was the perfect salve for so much disappointment. They were the fourth of Boston’s major sports teams to win a championship after the New England Patriots won Super Bowl XXXVI in 2002, but for those who bleed Black and Gold, it was about saving the best for last.

For one night in April of 2020, with everything going on around the country and world, with the current NHL season hanging in the balance so trivial in the wake of the larger loss of life to a hideous virus, getting the band back together (minus a few- Nathan Horton and Tomas Kaberle who left early for a business-related call to duty), was exactly what the fans needed.

Reunions remind us of who we are, and that ultimately, we move on from groups and events and go on with our lives. Here’s to those who get it, and understand the power that such an event has against the backdrop of the hurting and uncertainty/disruption in their lives that so many are going through these days. Gratitude that they made it happen and we could see what that experience meant for the men who lived it.

As Lucic, so appropriately reminded us all at reunion’s end last night as he raised his wineglass: “This is a family we’ll have for the rest of our lives. So, I love you guys. Cheers.”

Here is the link to Eric Russo’s NHL.com piece with the highlights in cased you missed it and can’t find a version online.