“Anyone who says they aren’t afraid in combat is either a liar or a fool; it’s like the line in Moby Dick, when the boat captain (Starbuck) says ‘I will have no man in my boat who is not afraid of a whale.’ What he’s saying is that if you don’t have enough sense to fear real danger, then you’re the actual danger– not only to yourself– but more critically, the others with you.”– Col. Sam W. Floca Jr., U.S. Army (retired)

It’s been a while since I’ve posted on the blog, and this one is non-hockey related, but a tribute to a real hero who left this mortal life this week, but whose light will shine on long after his passing.

On Tuesday,  we learned that Samuel W. Floca, Jr. lost his battle with cancer and other conditions he picked up in a life of service in the U.S. Army where as a young officer, he fought in the Vietnam War and was wounded a staggering five different times. Uncle Sammy, as he liked to be known to his close friends, was a native of Temple, Texas and served in the Army from 1963-92, rising from the rank of private to full colonel before retiring as a member of the Army’s War College faculty after three decades of distinguished service.

In retirement, he returned to his native Central Texas where he continued to serve our military- as a mentor and friend to countless Soldiers assigned to Fort Hood, touching several generations of officers, noncommissioned officers and leaders he came in contact with.

I got to know him late in my own career- 20 years in- as a lieutenant colonel and primary staff officer in the 1st Cavalry Division. He was attending the change of command ceremony of the 1st Squadron, 7th Cavalry Regiment, when one of my peers and a close friend was turning over command of the storied 1st of the 7th- Garryowen! Col. Floca was wearing a U.S. Cavalry Stetson with 4th Cavalry Regimental crossed sabers, so I struck up a conversation with the obvious Vietnam-era veteran and found out that we had a lot in common, and that looking up the division’s public affairs officer (yours truly) was on his “to do” list.

From that chance encounter, he welcomed me into his Soldier family, and I learned a great deal about the man who had enlisted as a rifleman in the Army just prior to the major troop buildup in Vietnam and went on to attend Officer Candidate School, getting his commission in the Field Artillery branch. He was soon after sent to Vietnam for the first of two combat tours with the 1st Infantry Division or “Big Red One” in early 1966- when the U.S. military was realizing that they had learned few of the lessons that the French had learned a decade-plus earlier against the Vietminh during the French-Indochina War.

Sam Floca often talked about the Army’s unpreparedness for the threat they faced in the jungles of Vietnam. Organized and trained to face off against the Soviet military machine in Central Europe, our forces were ill-equipped to face the Viet Cong insurgents and North Vietnamese Army regulars who knew the terrain and were wholly committed to their cause. The American military tried to win a war of attrition, and paid dearly for it. Floca’s first experience in Southeast Asia reflected that lack of preparation, but as he began to learn and adapt, passing those lessons on to the men he led as a young lieutenant, he was wounded seriously enough to force his medical evacuation to Japan.

After recovering from his wounds, Floca went back to Vietnam as a captain in 1968, and in a bid to get reassigned to his beloved 1st Infantry Division, agreed to take a billet on the public affairs (or public information as it was called back then) staff. He had taken a journalism course in college, and because of that, he essentially was able to talk his way into the open assignment with the 1ID PIO, avoiding the mass cattle assignment reception station process in Vietnam, by which he could have ended up in any of the combat units.

Once back in the Big Red One, Floca had a plan to get back out in the bush- he had a friend in the Division’s G1 or personnel section who had told him that if he could secure assignment to 1ID, he could get him into a line unit. And thus, Captain Floca was assigned to the 1st Battalion, 5th Field Artillery Regiment- “Hamilton’s Own”- the oldest Regular Army unit on active duty, tracing its lineage back to January, 1776 and commanded by founding father Alexander Hamilton. He would then receive assignment to the 2nd Battalion, 2nd Infantry Regiment (“Ramrods”) as the battalion Fire Support Officer.

On September 23, 1968, near Loc Ninh, an infantry unit from 2-2 came under enemy indirect and direct fire. Floca ran forward to position himself with the company in contact, then immediately began adjusting friendly mortar and artillery indirect fires on the enemy positions, preventing the American unit from being overrun. In his citation for the Silver Star, the nation’s third-highest award for valor after the Medal of Honor and Distinguished Service Cross, Floca was praised for placing himself repeatedly in positions forward where he was taken under direct fire by the enemy, calling in accurate indirect fire as close as 25 meters (!) to his own position, placing himself in tremendous danger. Wounded by shrapnel, he continued to call for fire and engaged the enemy in direct fire until the attack was defeated.

That, my friends, is the definition of a hero.

And like the first tour in Vietnam, Floca would not leave his second under his own power. He was wounded more severely after that action, and Captain Floca’s War came to an end once more. He would later go in and out of line unit artillery assignments and public affairs positions, because you see- that old journalism class did come back to haunt him. Even though he never typed a single release in country, that assignment to the 1ID public affairs office was on his personnel file, and there was no escaping the dreaded “needs of the Army” requirements when the time came.

He ended his career at the War College at Carlisle Barracks, PA, where he became the subject matter expert for the Battle of Gettysburg and conducted comprehensive staff rides at the battlefield to analyze the strategic implications and capture lessons learned. He retired from the Army in 1992, but it was in that capacity that he ended up becoming one of the key technical advisers on the set of the film Gettysburg produced in 1993.

The Sam Floca I knew enjoyed passing on his experiences as an Old Soldier to those who were a part of his own legacy of service. He no doubt left some stories and experiences buried in the deepest recesses of his wartime memories, but he loved being around the troops. As the Honorary Regimental Commander of the 82nd Field Artillery Regiment (Ancient Dragon 6 was his callsign), he was always there for the troops of the 1st Cavalry Division. I had him spend nearly an entire day sharing his experiences as a public affairs officer with my division PAO team, and as much time we allocated to him, he barely scratched the surface of his knowledge and insights.  As he was fond of saying, “The bond among Soldiers is never broken: race, creed, color…they’re your brothers, they’re your brothers for life.” You couldn’t drag Sam Floca away from his brothers in arms- no matter how much of a gap between the generations.

That’s why in retirement, he returned home to the Lone Star State, a proud a sixth generation Texan who had two relatives who had fought in the Battle of San Jacinto under General Sam Houston in 1836.  Floca’s east Texan drawl belied the fierceness of his warrior stock and loyalty to his roots. He used to say (and always with his million dollar smile), “I’ll never ask a man where he’s from- If he’s from Texas, he’ll tell you. And if he’s not, you don’t want to embarrass him.”

Floca’s house was like a museum- it contained an amazing collection of military art, toy soldiers, miniatures and dioramas of major historical battlefields. You could spend hours in Uncle Sammy’s pad, and not come close to digesting everything he had on display and each and every story that came with it. He lived alone in that house in Temple right on a golf course. He lived alone because like the rest of us, he was not a perfect man. His devotion to military service and some of the personal demons he picked up along the way cost him his marriage and family. He took ownership of that, and often spoke proudly of his daughter, Amy, whom he made clear was his greatest accomplishment.

One of my favorite items he had in that house was a photo of Amy with iconic actor Sam Elliott, taken when the veteran actor portrayed Brigadier General John Buford, commander of the Union Army’s 1st Cavalry Division for the Gettysburg film. I had grown up watching Elliott, and his portrayal of Buford was one of the things that inspired me to choose the armored cavalry as my branch when I commissioned in 1994. Knowing that Floca had advised and helped Elliott with his role made the memorable scenes he was in all the more special and impactful for me.

As I prepared to leave Fort Hood in late 2016, Colonel Floca gave me a couple of precious gifts from his personal art and book collection. In the book How Can Man Die Better, a detailed accounting of the British disaster at Isandlwana in 1879, he inscribed to me inside the book’s cover- “Kirk- Even as combat cavalrymen and PAOs, we would’ve had a hell of a time putting ‘spin’ on this one for the British press.”

He was a national treasure and while his battle against the ravages of disease on his body are finally over, all who knew and loved him already miss him terribly. Soldier. Leader. Mentor. Friend.

Farewell, Sir- Godspeed. I will see you again one day…at Fiddler’s Green.

If you are able,
save them a place
inside of you
and save one backward glance
when you are leaving
for the places they can
no longer go.
Be not ashamed to say
you loved them,
though you may
or may not have always.
Take what they have left
and what they have taught you
with their dying
and keep it with your own.
And in that time
when men decide and feel safe
to call the war insane,
take one moment to embrace
those gentle heroes
you left behind. 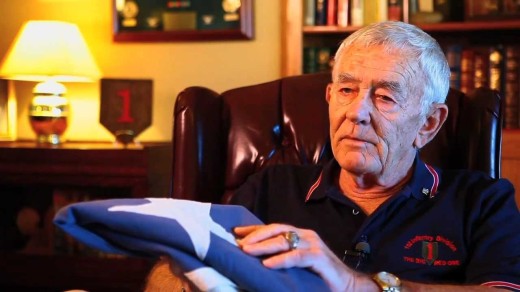