Well, here we are.

It’s Game 7 at TD Garden- last hockey game of the 2018-19 season for the honor of lifting the Stanley Cup overhead.

Boston Bruins are at home against the St. Louis Blues, who had the higher-seeded B’s on the ropes but couldn’t close the deal in Game 6. Now, it’s time to settle the matter of who will lay final claim to the title of world champions.

The B’s took a furious flurry of punches by the Blues in the early minutes of Game 6, with a frenzied, frothing-at-the-mouth crowd of St. Louis faithful hoping to see their team capture its first-ever Stanley Cup victory on home ice. Alas for them, Tuukka Rask and the more experienced Bruins had other plans.

Brad Marchand’s first period 5-on-3 goal drew first blood and the Bruins never really looked back after that, getting the winner from an unlikely source in defenseman Brandon Carlo, whose point shot skipped off the ice and past Jordan Binnington to make it 2-0 in an eventual 5-1 drubbing. Even rookie buzzsaw forward Karson Kuhlman got into the act, the undrafted free agent netting his first career playoff goal with a laser beam at the perfect time. It doesn’t hurt that Bruce Cassidy and his coaching staff are pushing all the right buttons.

At the other end of the spectrum, it didn’t help that the St. Louis Post Dispatch accidentally pushed out some content meant for publication in the event that the Blues took care of business at home. That kind of an unforced error seems inconceivable in this day and age, and yet- it showed the decided lack of experience St. Louis has as opposed to Boston when it comes to the matter of winning championships. Whatever…those silly gaffes didn’t play a role in the big win the visiting team leveled on the Blues, but it does show how thirsty that team’s fans are for a Stanley Cup- something they haven’t enjoyed in the 52 years of the franchise’s existence.

So, now it ends. A new champion will be crowned tonight, and the momentum is with the Bruins.

Unlike Game 5, when the B’s had lost Game 4 to the Blues on the road, the home team is returning with the confidence of a big victory under the belt, and the experience factor may be just too much for the younger, upstart Blues to overcome. After all, Zdeno Chara is about to appear in his NHL-record 14th seventh game.

And the Bruins are no strangers to Game 7’s in the Stanley Cup Final- they went the distance eight years ago in Vancouver.  Different team, different situation, but the core of Boston’s veteran team saw it and lived it- they’ll know precisely what they’re up against tonight.  Only…they’ll have the pure energy of their fanbase behind them as the B’s play in the first SCF Game 7 in franchise history. The late, great Stevie Ray Vaughan will be watching from above, and he knows…nobody is gonna be a-knockin’ when that TD Garden gets a-rockin’.

The Bruins will be ready when the puck drops tonight and with an atmosphere reminiscent of the epic 1-0 win over the Tampa Bay Lightning to close out the 2011 Eastern Conference Final, the Black and Gold will have a full wind at their backs.

Last week, the Omaha Lancers of the USHL held the team’s main tryout camp at Ralston Arena in Nebraska, and a familiar face was on hand in our building to watch his son make the team. 2001-born forward Cam Recchi is a chip off the old block- looks like his dad and plays like him, too (which is great news for the Lancers). Cam was 10 years old when he watched as Mark lifted the Stanley Cup over his head one last time (as a player- he’s won 2 more since as a member of the Pittsburgh Penguins organization) and skated off into the sunset with three rings.

As the time ticked down on Boston’s 2-1 Game 5 loss on the big screen televisions in the Ralston Arena’s Side Room lounge where Lancers players and their families gathered to watch a clash of titans, I stood next to Rex, one of the most beloved Bruins players in his three-season run to finish his Hockey Hall of Fame career.

“You guys lost Game 5 in Vancouver- what was the feeling going back to Boston for Game 6?”, I asked.

“We knew we were going to win the Cup,” Recchi said without missing a beat. “Vancouver was at their breaking point. They were worn down- it took everything out of them to beat us in that game, and we could sense they had very little left and momentum was in our favor.”

Swing it did, and the 2011 Bruins decisively beat the Canucks in two straight to secure the sixth Stanley Cup in franchise history, doing so on the road. The script didn’t quite play out the same way, but yet here we are- Game 7…winner take all.

“They’ve got this,” said Recchi as we walked away when the final horn sounded with the Blues up 3-2 in the series. “There are just too many experienced warriors in that room, and you can’t say enough about what that does for you.”

The Bruins are back home and in familiar territory, having beaten the Toronto Maple Leafs in Game 7 of their opening round series way back in April, which seems like a lifetime ago. The only thing is- they’ve had three more series of battles to hone their skills to a keen edge.

The Blues have done well to get this far- they are the heavy, nasty team we were all told they are. They’ve given the veteran club some serious punches, but as the old saying goes, If you’re going to kill the king, you’d better not miss.

The Blues took their best shot in Game 5 and had a chance to close it out in Game 6, but their trajectory went wide…and miss they did.

Tonight, the Blues are in the crosshairs. 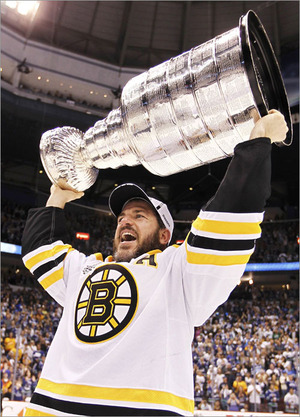