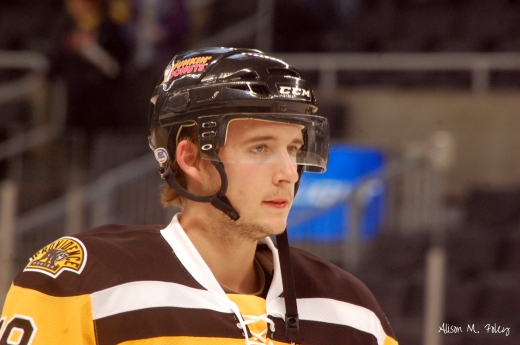 Editor’s Note- Once more unto the breach…Dominic Tiano is back to provide his analysis on options pertaining to RFA Ryan Spooner. Drafted in 2010, Spooner has spent his entire career with the Bruins to date, and whenever it has appeared that he was on the way out, he’s managed to turn things around. We’ll always respect Spooner for his willingness to see things through and be accountable when the play & production hasn’t been there. He’s not taken an easier path by trying to quit or demand a trade, but perhaps a change of scenery would work out for both parties involved. And now- 1/3 of the 3 Amigos- Dom- will give you his take.- KL

Like the one he’d use while dining at a fine restaurant, the fork Boston Bruins General Manager Don Sweeney is holding when it comes to Ryan Spooner has four tines. Each of those tines represent an option Sweeney has with the restricted free agent. They are:

Let’s take a closer look at these scenarios:

The Bruins could make Spooner available to the Vegas Golden Knights in the expansion draft. With no-movement-clauses, Patrice Bergeron, David Krejci and David Backes will be protected. You can bet Brad Marchand and David Pastrnak will occupy two more of the seven forward spots.

That leaves the Bruins with two additional spots to protect at the forward position. Despite what side of the fence you sit on with Spooner, unless you believe there are two players worthier of protection, then Spooner absolutely should be protected. Barring those two players, and unless your hands are tied, do you allow a player such as Spooner to go for no return?

I acknowledge the fact that the Bruins could acquire a player worthy of protection in a trade or in free agency. But, as of today, no such player is coming via trade and one won’t be coming via free agency – the latter not mattering since it comes after the expansion draft.

If such a trade does materialize, then Sweeney and company will make their decision. National Hockey League general managers can’t be dealing in ifs-ands-or buts. It’s just not that simple.

The Bruins could, and in my opinion should, give Spooner his qualifying offer of $1.1 million, if only to retain his rights, and begin negotiations on a contract. Spooner under contract will have a greater value than simply dealing his rights or exposing him to the Golden Knights.

Which brings me to the next point, salary arbitration. I am of the belief that Spooner conceivably could get more in salary arbitration than he could negotiating a new contract. Hence, I’d be surprised if the Bruins filed for salary arbitration. Which raises the question: If Spooner and agent Murray Kuntz believe the same, could they file for player-elected salary arbitration? It would leave Sweeney in a precarious position if the award is more than what he’d be comfortable paying.

That is just one of the reasons trading his rights won’t bring the value as a signed Spooner will. There have been reports already that Sweeney has shopped Spooner but no one wanted to pay the asking price.

What complicates matters even more for Sweeney is that, if a team without a vacant protection spot wishes to acquire him, that team may be forced to trade another asset to the Golden Knights to pass over him.

Contrary to what some believe, Spooner has value to the Bruins. If trading him is in the cards and before the expansion draft, that value may come more in a package deal. Otherwise, they can expect the return to be low.

He also has value to other NHL teams. But as I’ve said, a signed Spooner to a team that can protect him, or to any team after the expansion draft, should bring more back to the Bruins.

It’s all about the timing.

2 thoughts on “Dominic Tiano: What’s Next for the Bruins (Pt. 11)- Ryan Spooner”