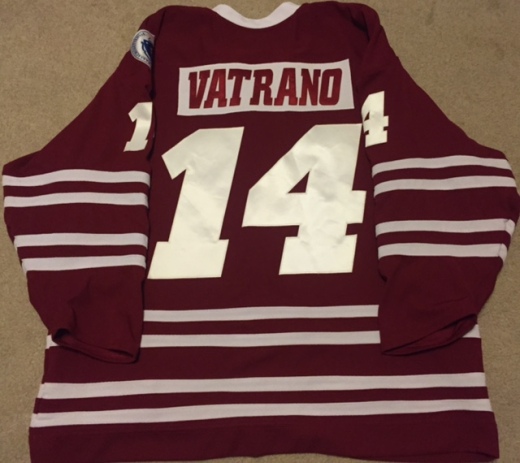 Got a tip after the first day of camp- fitness testing (closed to the media) was in the books- that the Boston Bruins were going to be without a player for quite some time due to injury. I had to scrap a bit to get a name, but by the next morning- I was hearing it was Frank Vatrano, and the worst of the fears started to come true after he was a no-show in both on-ice training camp sessions Fridayh at the Warrior Ice Arena.

Now, on Saturday, Don Sweeney and the Bruins have announced that Vatrano tore ligaments in his foot and will have surgery on Monday, Sep. 26 with a three-month recovery window. That’s a major setback for the Springfield Rifle, who was coming into the new season to make the case that he’s the B’s second LW behind Brad Marchand. That’s all on hold now.

The details are a little foggy- one player source tells me that Vatrano injured himself “weeks ago” but that the severity wasn’t determined (and player and team hoped that rest would heal it) until he engaged in the fitness testing and the cat got out of the bag that it was far worse than anyone thought.

It also answers the “how full of (bleep) are the Bruins” question that some fans were directing their way when Peter Mueller was announced as a PTO/invite to camp. Given that they had to know Vatrano might suffer such a setback, bringing in the veteran forward makes a lot more sense now. Of course- if he’s not up to the task, the vacancy up front will be filled by someone else, but at age 28 and as a former top-10 draft pick, why the heck not?

Danton Heinen is my choice to step up and grab a spot coming out of camp…he was already a dark horse favorite, but now- I think a spot is his to lose because he’s so talented and brings that high-end hockey IQ to the table. We’ll see, but I like Heinen as someone who understands the opportunity that just knocked for him- I expect the 2014 fourth-rounder to open the door and walk in.

More on Vatrano later- this is a tough setback for a kid who seemed on the verge of taking a next big step in the NHL after a dazzling pro hockey debut a year ago.He’ll be back, but it will be a path he’s likely got to earn every step of the way. We saw Seth Griffith deal with a similar situation when he was injured in the preseason last year and barely saw a sniff. For the record- I think Vatrano will get more of an opportunity to get back into the Boston lineup than Griffith received, but even when he’s cleared to return, the B’s will likely rehab him down in Providence and take their time. At least, that plan makes sense today on September 24, 2016. If the B’s scoring well runs dry in late December, we might see Frankie Vats faster than anticipated.