…did it really have to come down to one last game against the Ottawa Senators and even in the event of a win, a fate that still rests in hands of Detroit and Philadelphia?

On the plus side, the Bruins came out firing Thursday night and David Pastrnak’s goal less than three minutes in withstood Jeff Blashill’s coach’s challenge to give the home team a 1-0 lead that they never relinquished.

On the Wings bench, Blashill watched his former junior player with the Indiana Ice deal his club a setback in the quest to clinch 25 straight seasons in the playoffs, a mark that is still four years behind the Boston Bruins, who established a run of 29 years in the postseason before bottoming out in 1997. Torey Krug scored his fourth goal of the season and first since December 5 (55 games) with a power drive with the man advantage that beat starter Jimmy Howard to the blocker side and stood up as the winning tally. Krug’s two assists gave him three points and the game’s 1st star, adding to his career-best offensive output (his goal totals are way down, but his assists are 13 more than his previous high of 27). I’ve seen all I need to from Krug…he’s a winner and much more important part of this Bruins team than some give him credit for. I can assure you that if he was 6-1 or 6-2, he wouldn’t get anywhere near the grief or negative scrutiny he does from some people, but that’s life. He’s heard it all before, and ultimately, he’ll continue to grow as a player or person. Those who don’t think he’s worth the $5M or more it’s going to take to re-sign Krug- here are two words: Tough. Cookies. It’s going to happen and when it does, it will be money well spent. More on that later in a future podcast, but I don’t expect to win the critics over. Some folks are simply never going to come around on Krug, and that’s fine. Complete consensus is always difficult, and I’ll do my level best to present the case and then move on.

But first, back to the home win…

While it was a statement victory for the Bruins, who also got goals from Brad Marchand (37), Loui Eriksson (30) and Lee Stempniak (his third in 18 games with Boston since the trade deadline, 19th overall), real good goaltending from Tuukka Rask (31 wins) in making saves at critical moments of the contest to keep the Wings from ever mounting a serious push, it does make you wonder where this team has been for the past thee weeks.

The fourth line of Frank Vatrano-Noel Acciari-Landon Ferraro– aka “La Cosa Goalstra” and I’ve also seen them referred to as the Little Italy line (not sure who came up with that one) which is also genius because all three are at or under 6-foot in height, provided some impressive energy and ruggedness all night. They’re not making the kind of offensive demonstration that made the Merlot line the best fourth unit in the NHL during the 2011-13 hey day of two Stanley Cup appearances in three years, but the current Boston fourth line is grinding it out and making plays. Their ability to possess the puck and generate scoring chances while to go with solid physical play and defensive awareness means that they aren’t a liability. The production hasn’t happened yet, but the Bruins could do far worse.

Now, Boston gets to face the Ottawa Senators at home in the season finale. Optimistic fans would do well not to look past their division rival to focus on the other scenarios involving Detroit and Philly before the Bruins take care of business first. The pessimists and cynics of course- will say it doesn’t matter even if the Bruins get in because they are toast in the playoffs. Even if true, no organization should ever subscribe to losing on purpose and just the experience of playoff games for those who have yet to taste that, is of some benefit.

In any case, here are some various scenarios upon which Boston’s playoff lives depend (compliments of FOB (friend of blog) Dominic Tiano (thanks Dom!): 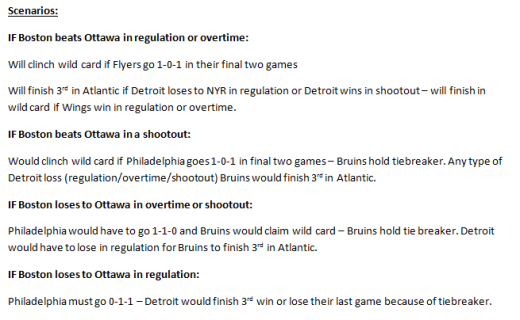 Once more, we’re reminded of so many opportunities the Bruins had previously to take the drama out of it by simply taking care of business when they were in position to do so.

It’s a team effort and no one factor, player, coach or manager is responsible for the Bruins potentially being where they were a season ago with little to show for all that has occurred since the 2015 campaign ended.

What is certain is that the Bruins must win their final game to give them the best shot at getting back to the postseason in Don Sweeney’s first year as GM. Even then, two other teams get a vote. If they lose to the Sens, then let’s face it- they can still get in, but they probably don’t deserve it.

Loui Eriksson tallied his 30th goal of the year last night for just the second time in his NHL career (he scored a season high 36 in 2008-09 with the Dallas Stars). With it, the Boston Bruins have three 30-goal guys in Patrice Bergeron, Brad Marchand and Eriksson for the first time since 2002-03 when Glen Murray (44), Joe Thornton (36) and Mike Knuble (30) did the deed. (My soon-to-be in high school daughter turned 1 the year they did for some perspective)

A year later, Knuble-Thornton-Murray were christened the “700-lb line” by none other than then-Montreal head coach Claude Julien in the 2004 playoffs. In case you forgot, the B’s blew a 3-1 series lead to lose to Julien’s Habs in 7 at the Garden.

Torey Krug’s 44 points leads all Boston Bruins defensemen and his 40 assists are second only to David Krejci– he has four more helpers than Patrice Bergeron. Throw out the aberration of a low (1.5 percent) shooting percentage, and he’s about as productive as they come from the blue line.

Tuukka Rask’s .915 save percentage is the lowest of his career to date. The last time he was under .920 was in 2010-11, when he posted a .918 after playing in just 29 games as Tim Thomas’ backup. That’s a reflection of both the fall-off in talent of this Boston Bruins team, but there are other factors in play. When it comes down to it- Rask has been hot and cold all year, as one Twitter follower sent me this stat today: Rask is 5th in the NHL for most games: 19 with a save % of .950, but also 4th with 10 games of a sv% of .850 or less. Sure- there’s a lot to be said for the quality of the defense and team in front of him, but he has some accountability in this, too. There were nights when he could have and should have played better. The Bruins can and should get more from their 7-million dollar man in net.

Class move by Greg “Puck Daddy” Wyshynski to tweet out his gratitude to Dom Tiano for breaking down all of the possible playoff scenarios. Give Dom a follow if you don’t already and if you do, then you know how passionate about hockey and the Bruins he is. He’s also one of the smartest people out there on the nuts and bolts of the CBA and how things work behind the scenes. This is tedious work for those of us who have to research the myriad documents and complex language of the NHL’s by-laws and regulations, but having Dom as a friend and resource has helped me and countless others to get the reporting right. Take a bow.