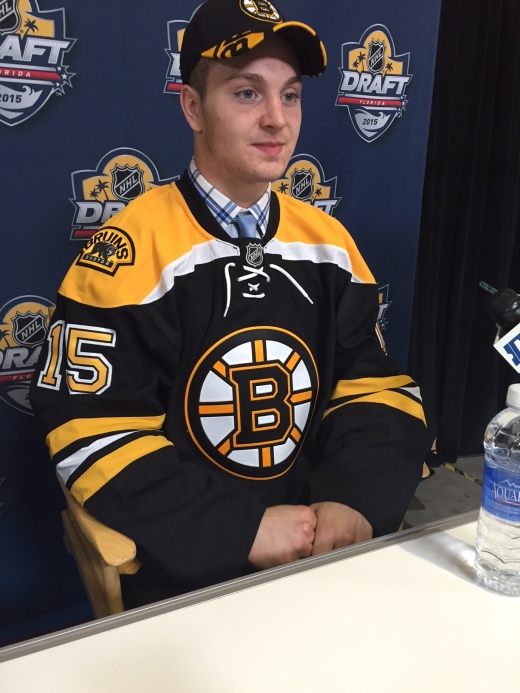 In about five years from now, when analysts look back at the 2015 NHL Entry Draft’s better values, fourth-round selection Jesse Gabrielle might make a few top-5 lists when all is said and done.

A Saskatchewan native who carried a second-round grade for much of last season slipped down past the first 100 selections, going to Boston in the middle of the fourth round (105th overall). There are different theories behind that fall, but several scouts alluded to some undisciplined play and a lack of focus off the ice that likely did the most damage to his draft stock. In January 2015, Gabrielle was 45th on the Red Line Report’s monthly ranking (and 8th-best prospect coming out of the WHL with Brandon Carlo and Jake DeBrusk being Nos. 6 and 7), but by the time RLR published the June draft guide, Gabrielle had fallen out of favor and plummeted down to 132.

Since the draft, Gabrielle was traded by the Regina Pats to the Prince George Cougars (he began his WHL career with the Brandon Wheat Kings before moving to Regina last Feb.) and surged out to the team lead in goals (23) and points (40) in his first 37 games this season. He’s outscoring Jansen Harkins, a much higher-touted draft prospect who was drafted 47th overall last June in the second round, but was considered by many to be a solid first-round prospect.

Scouting report: Agitating left wing who has some legitimate toughness and ability to fight his own battles when he gets under opponents’ skin. Stands about 6-feet in height but is a stout 200 pounds and brings a strong core that allows him to be heavy on the puck and absorb hits from would-be checkers. Good skater with an efficient stride who can accelerate quickly in space. Underrated puck handler; thrives in traffic and has the vision and hockey IQ to drift into seams in the offensive zone. Shooting the puck with much more authority this season: has already tied his single season best in goals with 23, equaling last year’s total, which he did in 66 games.Plays on the edge; always finishing his checks but will also find himself in the middle of scrums and finds himself on the receiving end of reputation calls. Will drop the gloves and is a sneaky dangerous fighter who is strong on his skates and can more than handle himself against some tough customers in the WHL.

Film study: I broke down his most recent game against the Vancouver Giants, played on December 30. He scored a hat trick, tallying late in the 2nd period on a wicked one-timer with less than 20 seconds remaining in the period. He followed that up with the game-winning goal at 5:05 of the third period, then scored into an empty net for his first hat trick of the season.

His first goal occurred off a faceoff in the offensive zone. Though Vancouver won the draw, a bad decision to try and rim it around the boards to clear saw the puck intercepted by Brogan O’Brien. Gabrielle, recognizing that his center was in position to stop the clear, immediately drifted in between the faceoff circles and opened up his hips to receive a pass. O’Brien’s feed was on target for Gabrielle’s one-timer- he took a big windup and drove the puck high into the twine behind the sprawling Giants netminder (Ryan Kubic).

His second goal was scored off the rush after PG defender Tate Olson carried the puck out of his own end, generating speed through the neutral zone before hitting O’Brien in stride up along the right wall near the offensive blue line. O’Brien worked the puck deep into the Vancouver zone but was checked as he tried to skate out with it. However, with some help from Chase Witala and Gabrielle, who came in to knock the puck away from Vancouver defender Dmitry Osipov.  O’Brien then dished the puck to Gabrielle as he cut to the net and buried a laser of a wrist shot from the slot that beat Kubic high to the glove side. Gabrielle smartly skated away from at least three Vancouver defenders to get to some open ice then simply ripped a shot up under the crossbar that the goalie had no chance on. He showed an impressive release with some real power on his shot to snipe his 22nd goal of the season.

Gabrielle tallied the hat trick into an empty net with 33 seconds left in the game. Firing up the ice on a breakout with Harkins, he took a pass from his teammate and hit open cage after crossing the red line to finish the night with three goals and a +4 rating.

He worked the walls with strength and efficiency, winning several battles for loose pucks. He showed good poise with the puck and made his shots count, scoring key goals at the end of the 2nd and then tallying the 4-3 game-winner. He drove to the net and into the dirty areas, fighting through checks and finishing checks of his own when he didn’t have the puck.

I looked at a couple of his fights- he beat Calgary Hitmen forward Elliott Peterson pretty soundly back in October (he also scored a pair of goals in that game but is still looking for his first Gordie Howe hat trick of the year). You can see how strong his upper body and legs are in how he stands in against bigger guys who try unsuccessfully to pull him off balance. He’s an aggressive puncher and in one instance- he took a hit from one player (who was getting penalized for it), saw he wasn’t much of a fighter, so went out looking for someone else to take on, throwing down with Edmonton Oil Kings defenseman Dysin Mayo.

Projection: Gabrielle was drafted by his favorite team last June, and isn’t shy about talking about how much he derives inspiration from Brad Marchand, his favorite player. He has the potential to be a similar type of player one day at the NHL level. He doesn’t have Marchand’s speed, but does bring similar scorer’s tools and instincts, and is bigger and a more dangerous fighter (though by no means a heavyweight/enforcer type).

All in all- Gabrielle looks like a fine value selection for the Bruins, one year after they took another highly-regarded prospect in the same round in Danton Heinen.

Watch for Gabrielle to be invited to the Team Canada Evaluation Camp in August and you would think that with his goal scoring prowess and nasty edge, is already a leading candidate to make the 2017 World Jr. squad. He just needs to keep maturing on and off the ice and keep demonstrating commitment and personal discipline, but the early indications are that this player is going to make an impact at some point.