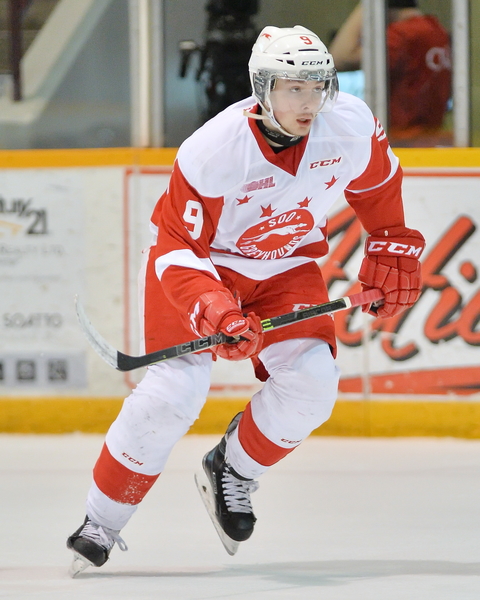 If you’ve read this blog since the inception in July, then you probably know quite a bit about Soo Greyhounds right winger Zach Senyshyn. My fellow prospect analyst and OHL guru Dominic Tiano even had a point-counterpoint here about the Ottawa native over the summer and I drew the unenviable task of trying to argue that taking him at 15th overall was a reach by Boston. You can read that debate if you missed it.

But now, the Hockey News has a nice little feature on him (along with video of his memorable goal provided by the fine Weekend and Bergy’s Bruins blog), so it is readily apparent that the mockery and jeers that dogged the Bruins on draft weekend are pretty well in the rearview mirror at this point. The kid is a player and he’s proving it in his second OHL season after scoring 26 goals and 45 points as a rookie on the bottom two lines. Now skating on the top line, he’s got 10 goals in 17 contests…well on pace to blow past his impressive freshman totals.

Senyshyn’s success is a reminder that when it comes to any pro sports draft, winners and losers aren’t decided the day of the event. There’s no guarantee that he’ll go the distance and establish himself as a legitimate top-two scoring wing in the NHL with the Bruins, but given the near-universal panning of the pick, the snarky, condescending snickering that occurred in Fort Lauderdale, Boston is getting some immediate contributions from Colin Miller and Senyshyn looks completely comfortable as a player selected in the middle of the opening round.  That’s not even taking into account that in addition to Senyshyn, the B’s also drafted BU center Jakob Forsbacka-Karlsson and QMJHL two-way D Jeremy Lauzon with the other two Calgary picks acquired for Dougie Hamilton.

It is now apparent that had the Bruins not stood pat and taken Senyshyn at 15, someone else would have grabbed him before the B’s would have likely had another opportunity (if the rumor about offers for trading out of the 15th spot are true).

He’s not just a bull on the wing who uses explosive burst and acceleration to blow by defenders on the outside, then uses his 6-foot-2 frame to drive the net and score, but he’s a quality kid who wears the ‘A’ this season (the Greyhounds do not have a captain) and is a prime candidate that Tiano believes will captain the team next year. That’s assuming he doesn’t make the Bruins, but in all honesty- when he was drafted by Boston, the talk all along was that Senyshyn was going to need several years of development before he could realistically compete for a spot in the NHL. We have to remember that unlike many of his peers, Senyshyn is only in his second OHL season after spending 2013-14 with the Tier 2 Smith’s Falls Bears before making the jump to the Soo.

In short- Senyshyn is exhibit A for why the NHL draft is an inexact science. You would be hard pressed to find many people out there who thought he could be chosen in the top half of the first round, yet the Bruins went for it. Their reward for showing faith in the young colt was to be blasted by pundits and fans alike, even though he represents a far better fit for what Boston values and is trying to do versus a skilled but undersized center who has battled injuries and would be harder pressed to crack this Bruins lineup given the strength up the middle.

The point of this post is not to crow about Senyshyn- there is still a tremendous amount of work ahead for him, and he’s not come close to making it yet. He’s still pretty raw and far from a finished product. However- when you do some film study, he’s still doing the things that brought him success a year ago. The best thing of all is that his opponents don’t have an answer for it. Senyshyn works hard and imposes his will on games given his size, speed and impressive offensive skills. The big difference for me in seeing the film this season versus last year is that he’s displaying creativity I wasn’t sure he had.

Put that all together and it’s adding up to a fine situation for the future, all the more rewarding for the Boston scouts who wanted Senyshyn and convinced Don Sweeney and Keith Gretzky to spend the third first-rounder on him rather than trading out of 15 and all but missing out.