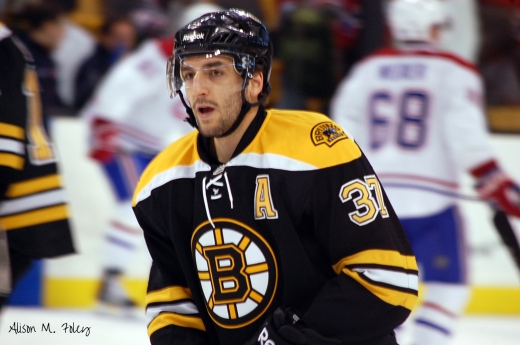 The Boston Bruins kicked off a two-game road swing in the Sunshine State by beating the Florida Panthers by a 3-1 score in the first of back-to-back nights with the Tampa Bay Lightning up tomorrow.

Brad Marchand tallied a pair of goals and played a superb game overall, while Tuukka Rask continued his career dominance over the Panthers, posting his 16th win against just two losses in making 32 saves. Zdeno Chara also scored his first goal of the year, one of two power play goals as the B’s continued their red-hot play with the man advantage this season with 11 in just nine games.

David Krejci extended his point streak to nine games and 15 overall) with an assist on the Chara goal. His shot on net in the second period was kicked out to Chara, sneaking in the backdoor, and the captain put it in the open side past Roberto Luongo to give the B’s a 3-0 lead.

When the Bruins got into penalty trouble a short time later, Nick Bjugstad scored while Florida was on a 2-man advantage to make it 3-1. When Adam McQuaid cleared a puck over the glass and took a delay of game penalty, the Panthers had another 5-on-3 power play but couldn’t get any closer thanks to several tremendous stops by Rask.

Boston thought they added to the lead later in the frame when McQuaid blasted a shot home, but the referees waved it off due to incidental contact by Loui Eriksson with Luongo.

Marchand giveth, but he taketh away, too- as he was whistled for a five-minute major and game misconduct for boarding Panthers defenseman Dimitri Kulikov with a little under three minutes left. Assessed another match penalty after one earlier this season, he’s got an automatic suspension pending review from the league.

With Luongo pulled and the Panthers on a 6-on-4 advantage, they were unable to penetrate a solid penalty killing box, as the Bruins paid the price by blocking shots and collapsing back to deny the home team quality shooting lanes and looks. When the B’s needed a clear, they could just rifle it the length of the ice without an icing call and were able to bleed the clock down to secure the victory.

Tuukka Rask- Give it to Boston’s No. 1. If he wasn’t tested all that much against Arizona, he certainly faced more quality shots tonight, making 17 superb saves in the final frame to frustrate the Panthers en route to a .970 save percentage for the night. He only stopped seven in the first period, but they were challenging and allowed the B’s to take a lead. He has righted the ship after a brutal start and this was a quality start for the 28-year-old. His confidence is back and so is that of his team, and for the Bruins it could not have come at a better time.

Brad Marchand- His final shift aside, this might have been one of the best games we’ve seen from Boston’s little buzzsaw in a long time. His first goal was a deflection of a Chara point shot, driving the puck down and past Luongo. His second goal was even better; after getting knocked down in the corner by Eric Gudbranson, he got up, beat Gudbranson to the front of the net, took a pass from Torey Krug and then sped around Luongo to tuck it into the far side.

Zdeno Chara- Scored his first goal of the year and assisted on Marchand’s first period power play tally. The Bruins are just a different team and defense when he is in the lineup and that’s a fact. Yes, he’s not as mobile or effective as he was in his prime, but with his size, reach and experience, Chara still gets the job done. On one sequence, he simply shoved Vincent Trocheck off the puck and then made the clear himself. Why? Because he can.

Patrice Bergeron- Boston’s veteran center had an assist, but his impact was felt everywhere that the game was won- primarily in the trenches as he won key defensive zone face-offs at clutch times, made the smart passes and plays when the B’s needed them and came back after a scare when he took an Alex Petrovic slapper off the thigh and immediately went down the tunnel. He’s the team MVP and while he didn’t have the productive night others did, this game might have a different outcome without him out there doing the little things.

Nick Bjugstad- You can see why NHL scouts were so high on his raw potential back in 2010. He’s so big and long-limbed that he gets up the ice effortlessly and has a real nose for the net. He beat two Bruins to the puck on his goal and nearly had a second goal on the night with a first period breakaway where he showed an impressive separation burst and forced Rask to make one of his best saves of the night.

Brad Marchand- You can argue the validity of the call (and even then- good luck with that), but why does Marchand seem to put himself in these situations? It didn’t come back to haunt the Bruins, but e’s facing supplementary discipline from the league, and that will hurt the team because he’s playing some of the best hockey of his career.

Roberto Luongo- Remember when this guy was a Bruins killer? Ever since his 2011 Stanley Cup Finals meltdown when he whined about Tim Thomas not pumping his tires enough and was subsequently lit up in Games 6 and 7, Luongo has been a mere mortal against the B’s. He was pretty mediocre tonight, while Rask was outstanding at the other end. Bobby Lu just can’t seem to catch a break. And what’s up with that mask? Looks like Ms. Laroque’s third grade art class came up with the concept.